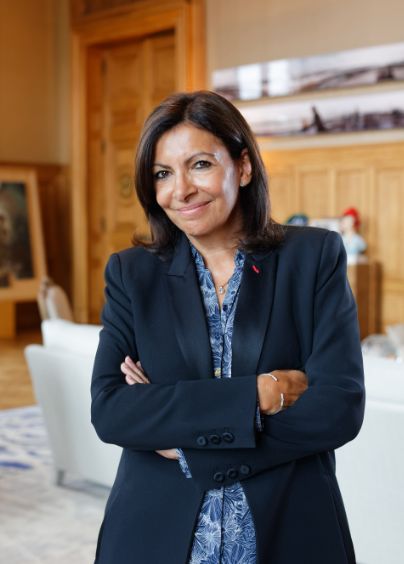 On 2014, Anne Hidalgo became the first woman to be elected Mayor of Paris.

She was born in Spain and acquired the French citizenship in her youth, she is a mother of three. After she graduated with a Master of Advanced Studies in social law, she became a labor inspector. She has been a member of the socialist party since 1994, serving as national Secretary for Culture and Media, she later was in charge of the vocational training.

From 1997 to 2002, she worked as an adviser in three Minister’s cabinets, under Lionel Jospin Government. She served as Paris First Deputy Mayor of Mayor Bertrand Delanoë, for thirteen years, in charge of gender equality at first then of urban Planning and Architecture. She led the Parisian left coalition to victory in 2004 and 2010.

She was re-elected mayor of Paris in 2020, heading the left-wing coalition "Paris en commun", pursuing an ambitious program designed to transform Paris into a zero-carbon city by 2050. She holds the position of First Vice President of the Greater Paris Metropolitan Area.

As Paris mayor, she actively pursues a policy based on social inclusion, sustainable development, climate change, air quality, solidarity, innovation and citizen participation, all of which are essential issues for the future of Paris. She is committed to advancing these issues at the international level. She organized in Paris the climate summit for local leaders, a major side event of COP21 (December 2015). For its fifth anniversary a “Zero carbon Forum” was held at Paris City Hall (December 2020), alongside with many international events. Some programs launched under the supervision of Paris, such as Cities for Life, Reinventing Paris, the Participatory budget, Embellishing Paris… are now benchmark programs.

She wishes to shape Paris into a 15-minute city, an ambitious, inclusive, quantifiable and efficient program that places citizens at the center of urban transition.

From 2016 to 2019, she chaired C40 Cities Leadership Group, which consists of 90 megacities committed to address climate change. Within C40 she launched Women4climate initiative in New York (March 2017) and a plan for air quality in Paris Air’Volution (March 2017). In collaboration with other cities and international agencies she started the Global urban Air Pollution Observatory (GUAPO). In 2019, she also launched the Justice4Climate initiative, in the wake of a ruling of the European Court of Justice confirming that the cities of Paris, Brussels and Madrid are entitled to challenge vehicle emission regulations set by the European Commission and adopted by governments of member states.

She is President of the International Association of Francophone Mayors (AIMF), Co-Chair of the cities world organization, United Cities and Local Governments (UCLG) where she chairs the gender equality commission, and also President of SOLIDEO, an Olympic Equipment Supply Company, responsible for the supply program and development operations for the organization of the Olympic and Paralympic Games of 2024 in Paris.

She has published several essays (available in French only)